Happy New Year as today we will shift from 2018 to 2019! And a new year is always a great moment to reflect over what has happened in 2018. And so I want to give you an inside peak to the most searched and looked at Japanese cabinets on Hard–Candy.com during 2018. I hope you enjoy this countdown and the candy we love and appreciate. Let’s start the count down! 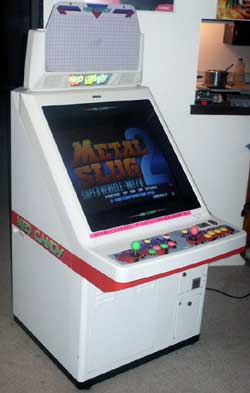 SNK has produced quite a new number of Japanese candy cabs and the top 25 is quite frankly dominated by their Neo Geo candy’s and with good reason. For their time the design looked great and still today they are famous for not only for the nostalgia but also for their nice and curvy design that seems to be flowing. They are truely eye candy! 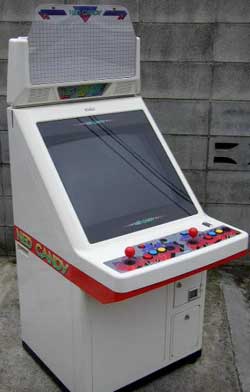 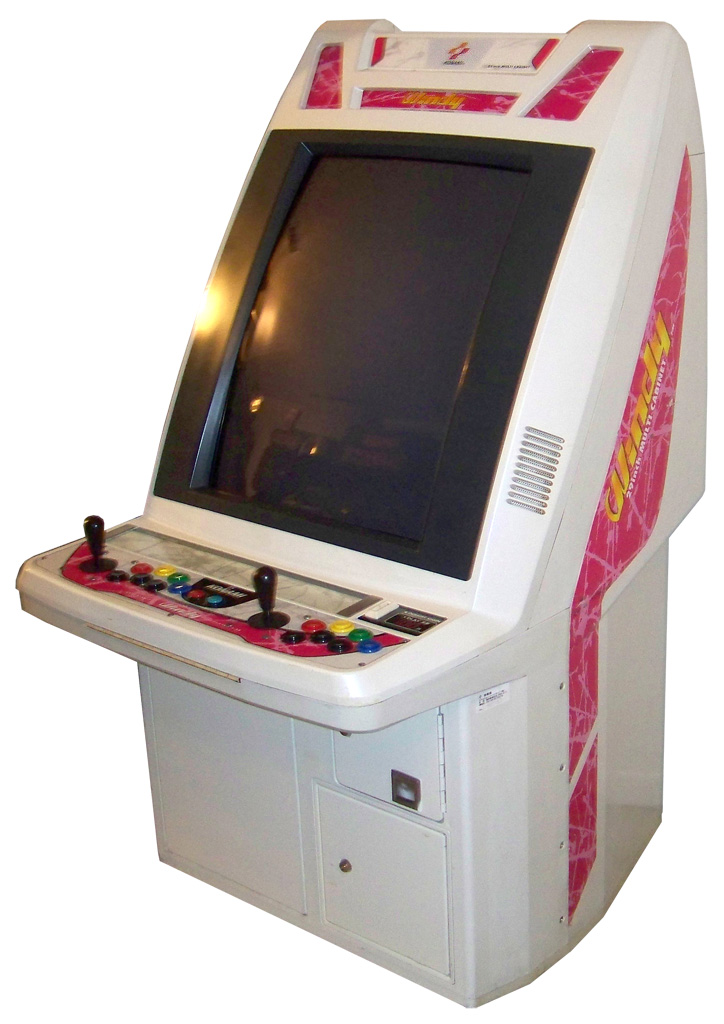 Windy? Well maybe after new years eve from all the crazy crap and beer

but anyway, Konami made this candy cab in 1996 and boy this thing was on fire. Compare to the other cabs this cab looked like it come from the future. A nice addition to any arcade or mancave. Nice and bright color scheme, let’s face it, who doesn’t like pink? 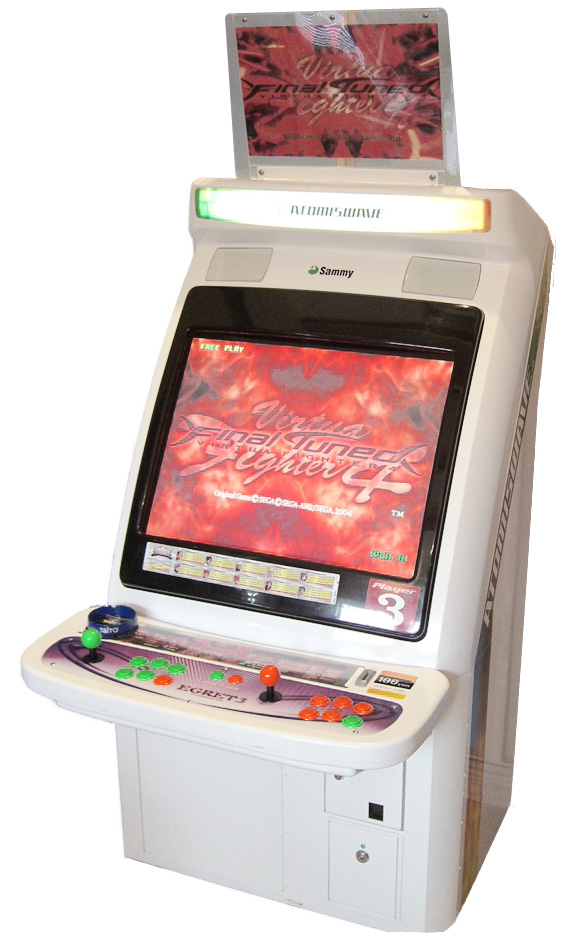 This nice looking candy has a nice slim fit design. Curves but not too curvy as if the candy cabs were following fashion they also developed styles that worked for that time. This has been the last arcade cabinet that Sammy Corporation made but fortunately this was their best creation. Or at least that is my humble opinion. Let me know if you feel differently. 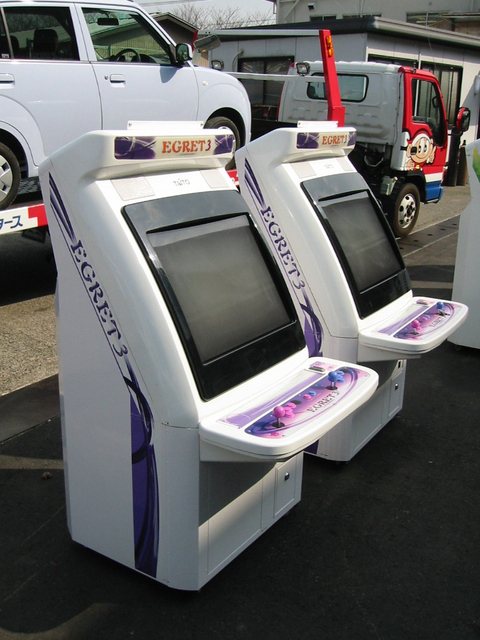 Taito also made their mark in history with their candy cabs. The Egret 3 is a beautiful addition from their fleet but later on in this top 25 we will find even better additions. 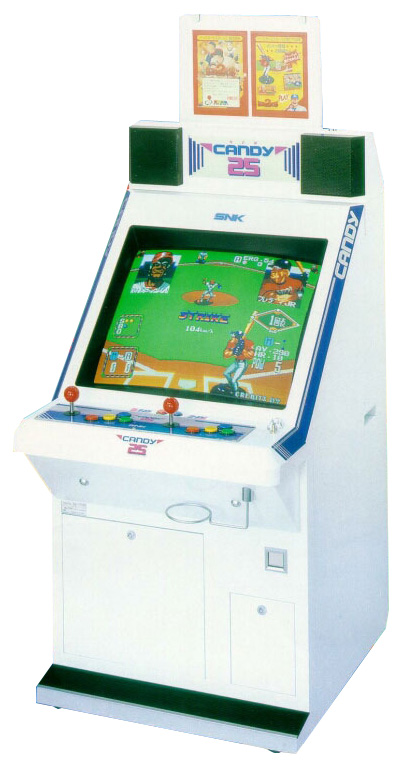 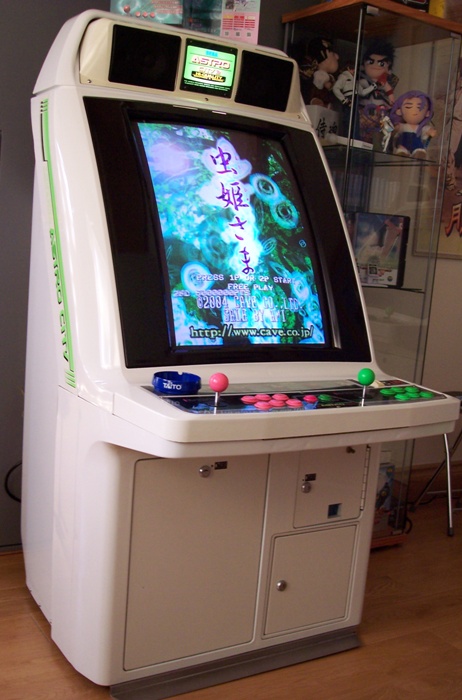 Sega’s Astro range is still very popular today. A lot have been made but also have been saved. They are nice looking candy cabs with a great recognizable color scheme. 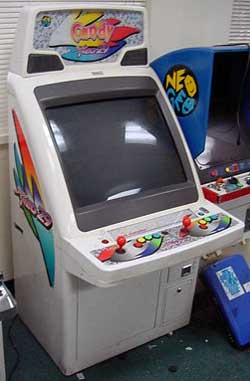 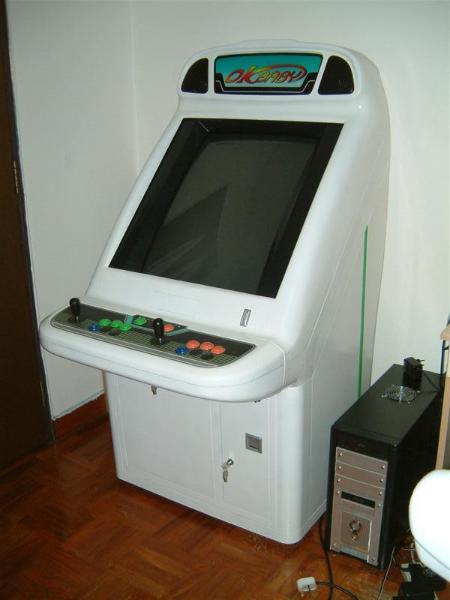 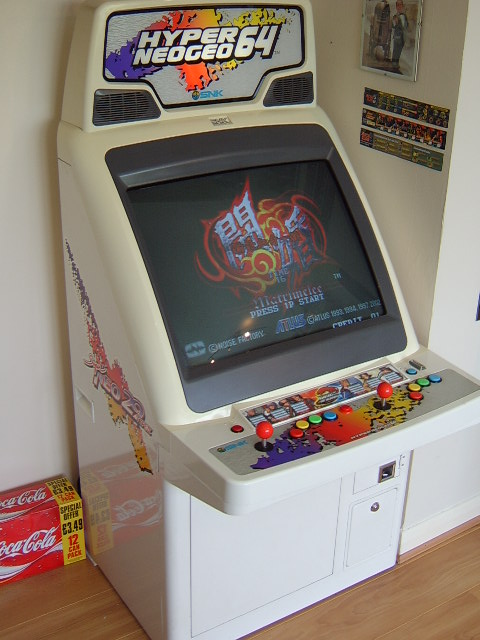 SNK’s first cabinet with the Hyper Neo Geo 64 hardware in it to play 3d modelled games like Road’s Edge and Samuari Shodown 64. 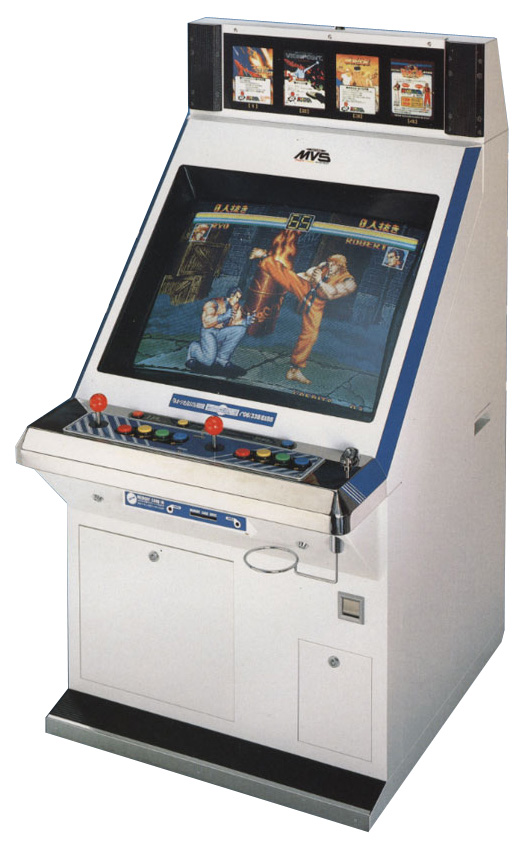 A great looking SNK candy cab with the MVS hardware in it that supports 4 different game cartridges to be played in the same cabinet. By using the additional buttons on the control panel one could select a different game. The nice chrom 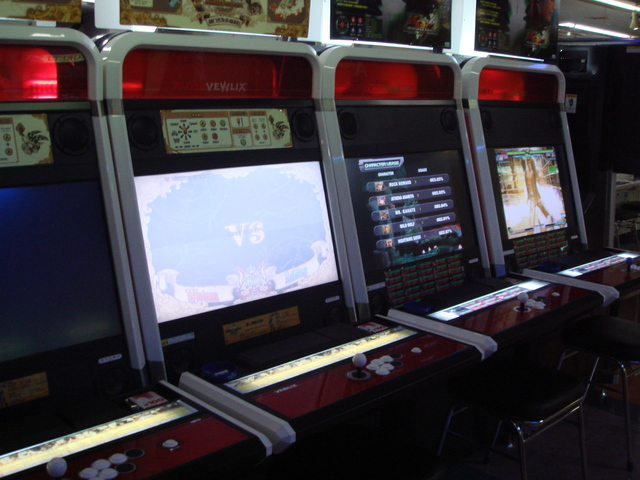 A new hype hit the arcades in 2007. Taito introduced the Vewlix and with type F they set the bar high for the new generation of candy cabs. Great sleak looking design was different to what we have seen up to then. It gave the option to create an even greater user experience with HD possibilities, great sound options and great looking design for any arcade. Not everyone loves it but with a 14th position a great addition to the list. 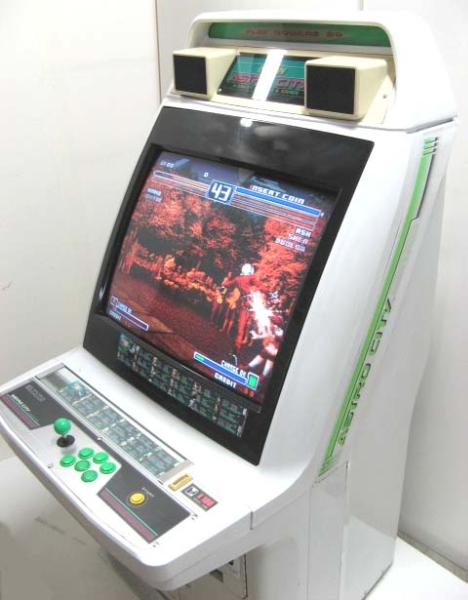 Say what? Yes G-Balance. After the introduction of the Vewlix GFI Limited also created a new generation candy named G-Balance. This candy looks a bit more bulky than the Vewlix but nevertheless a very nice design. The black, white and metal gives a nice feel to the design. As far as I am aware this is the only cab that GFI made. If you know of more please let me know. 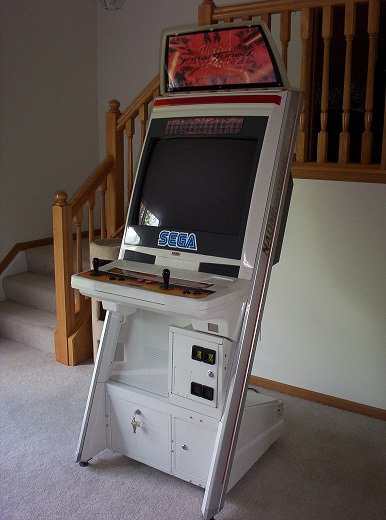 Ah yes, the Naomi Universal, I particularly love this cabinet. I have worked years to restore one and convert it into a monstrosity. Pure happiness when I think back about those days. A great cabinet to work with. The legs hold the wiring and the design really makes my heart pump harder. to me this has been a well thought out design and I believe a lot of people have and continue to enjoy with Naomi Universal or New Net City for that matter. Sega did a great job on these. Well deserved 11th place for Sega’s Naomi Universal. 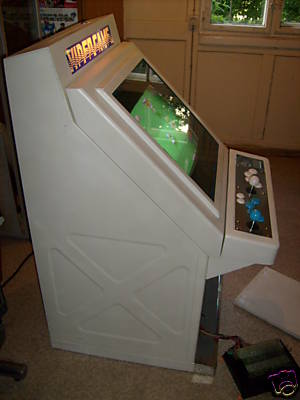 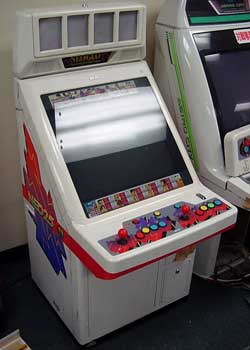 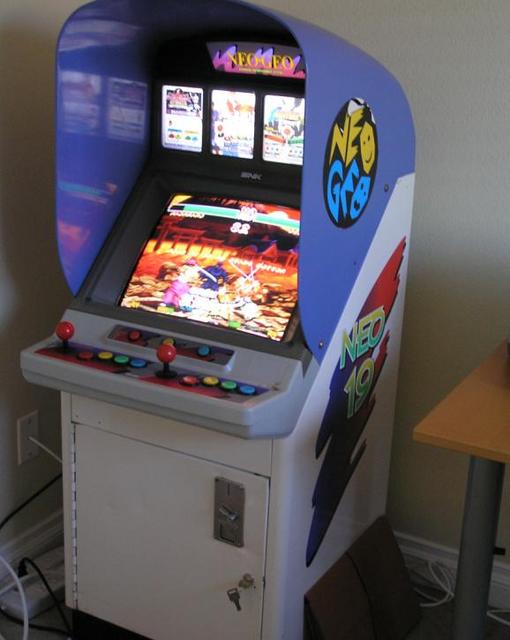 Yeah yeah, we get the point, Neo-Geo is hot… 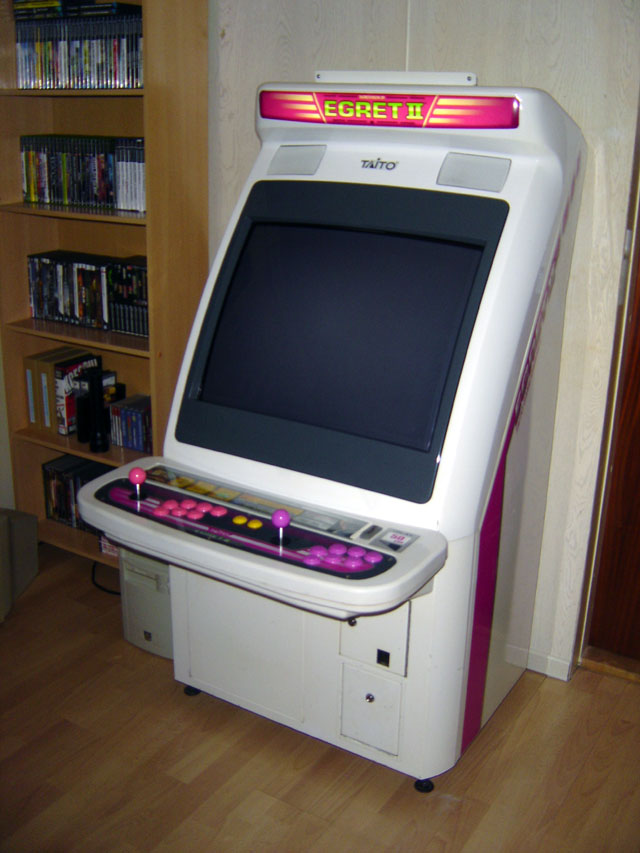 So the Egret II is the most favorite Taito candy in the list. It surprised me as I thought the Vewlix would do better but fair enough, I love retro so well deserved. This cabinet is known for its rotating mechanisme which makes it very versatile to change games from horizontal to vertical and back without opening and dismantling the whole monitor. 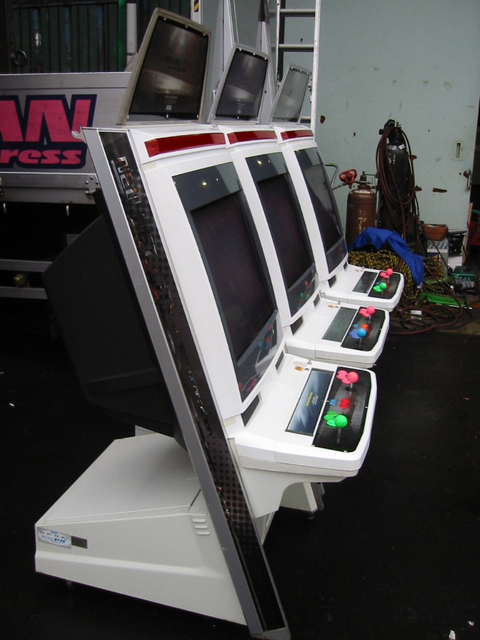 Although so far SNK has done a great job in the top 25 here we will find the contesters, Sega also did a great job with some awesome cabinets. Great design much like the Naomi Universal we saw earlier in the list. This great machine was equipped with a super flat CRT monitor from Toshiba. Great gaming experience here. 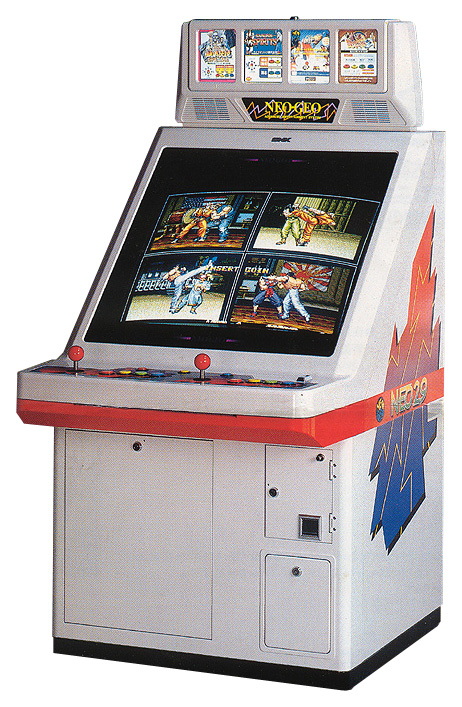 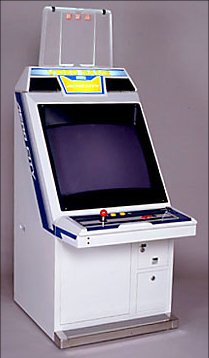 Released in 1988, the Aero City is the machine that brought fame to Sega’s City series. The basic control panel configuration did not change from the Aero Table 26, but because of its compact design it remained a fixture of game centers for a long time. Its other merits included a 26 inch monitor that was large for its time, and its easy operability. The machine was compact, but at 110 kg, it weighed 20 kg more than the Aero Table. The Aero City was also sold in yellow and green. This may have been an attemp to escape the dark and scary image of game centers that many people still held onto. 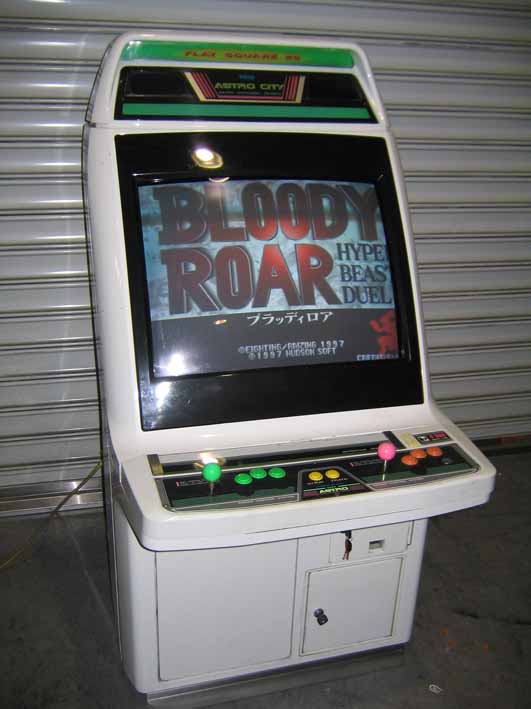 Released in 1993, the Astro City supported a new large-screen 29-inch monitor. The glass that had been outside the monitor was done away with. The Astro City’s resin body was lightened to 93 kg. See, no speaker ears here! 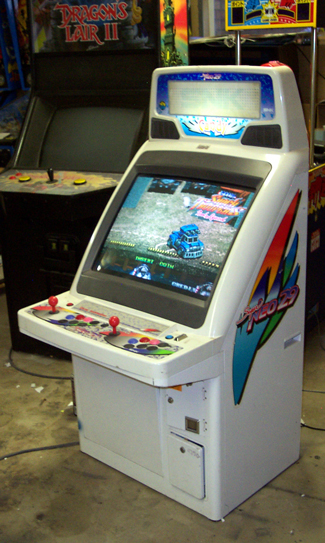 The SNK Super Neo 29 is a worthy upgrade to the original Neo 29. Although the shape has changed from boxy to aerodynamic, it retains the same accessibility options, same PSU, etc. The 90’s art scheme is still here, but it has gone from squiggles to granite, and the monitor now autosyncs between low and medium res. The biggest cabinet change is going from the plexiglass over the monitor, to a completely exposed monitor, however, doing this sacrifices monitor rotation accessibility, which is no big deal. The cabinet is also slightly more compact than the Neo 29, but the back door is oddly-shaped to account for the monitor neck, which makes it more challenging to lay on its back when moving it.

What’s cool about this cabinet is all the options available. The Neo 29 only had monitor size and JAMMA variations, but the Neo 29 has no 25″, etc. variations and instead lets you choose between JAMMA (“Candy”), Type II (different artwork and Hyper Neo-Geo 64 ready), and marquee styles including 4-slot, long marquee, and even a hard-to-find version with an LCD monitor and camera built-in. The LCD monitor allows you to mirror the monitor image, use the video camera image, or use any input from an RCA source.

Unfortunately, the Super Neo 29 suffers from the same fatal issue as the Neo 29, which is the eventual yellowing of the plastic portion around the monitor. Otherwise, if you’re into Neo-Geo or Hyper 64 games, this cabinet is definitely for you.

Can we have a drumroll please! The number #1 most searched Japanese candy cabinet in 2018 is…… 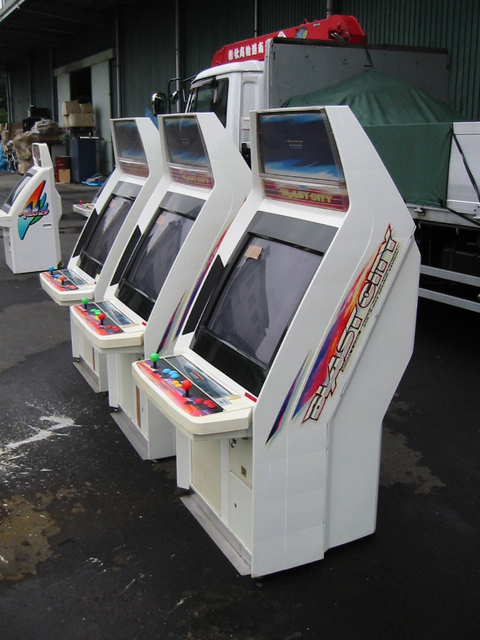 The Blast City debuted in 1996 at the same time as Virtua Fighter 3, and was designed as the successor to the New Astro City. To take advantage of Sega’s Model 3 technology, the Blast City was the first Sega generic cabinet to support a high resolution monitor at 31 KHz. Despite the 31 KHz monitor, ultimately only 24 KHz games were developed for Model 3, until the arrival of NAOMI. The monitor size did not change from the 29-inch monitors found in previous cabinets, but the screen was flatter. The weight of the cabinet increased slightly, to 101 kg. In Japan, Blast City cabinets with the Nanao MS-2931 monitor are commonly referred to as New Blast City (introduced 2 years after the first Blast City debut). All USA version Blast City cabinets (Bass Fishing) came equipped with the MS-2931.

I hope you all enjoyed the list. If you have looking for other Japanese candy cabinets please have a look at the list here: https://hard–candy.com/candy-cabinets . Enjoy new years eve and see you all safely in 2019!